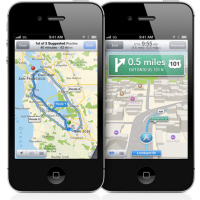 So, the iPhone 5 came out on the 21-st of September 2012 packing the new iOS 6 and a lot of people were thrilled about the new features the phone had to offer. Even 60% of Apple owners, who owned other Apple products, made the update to iOS 6 for the new great stuff the OS had to offer, but as soon as they had time to play around with the features and the new maps, they were very displeased.

Is it really that bad?

Why were they displeased? Because they were blurry, wrong, warped even cities, streets, addresses, monuments and buildings were missing or placed wrong. And yes, that bad! Apple did state that they were ditching Google maps for their own creation but they never gave a warning about the state of the app to the customers nor did they tell Google about it. Fans were shocked to learn that Apple had more or less than a year left on their contract with Google and they still managed to remove the Google maps app from iOS 6 leaving customers without any map substitute while they are working on theirs. Many hackers have tried to port iOS 5 Google maps to iOS 6 but that has proven hard and/or impossible. Now Google are waiting to see where Apple will stand after this fiasco, will they manage to fix it all or will they run to Google again. Oh, and Google are currently in development for a maps app for iOS 6 but we have no further information on the project since it is a somewhat of a secret, because they have to recreate and integrate their maps with Google Earth to create a 3D environment and to make the app use less carrier traffic. Until then iPhone 5 owners and iOS 6 users are stuck with the incomplete experience and getting lost while driving. Because of all this and some minor glitches with Siri, Apple’s stock market value has dropped by 30 billion dollars! 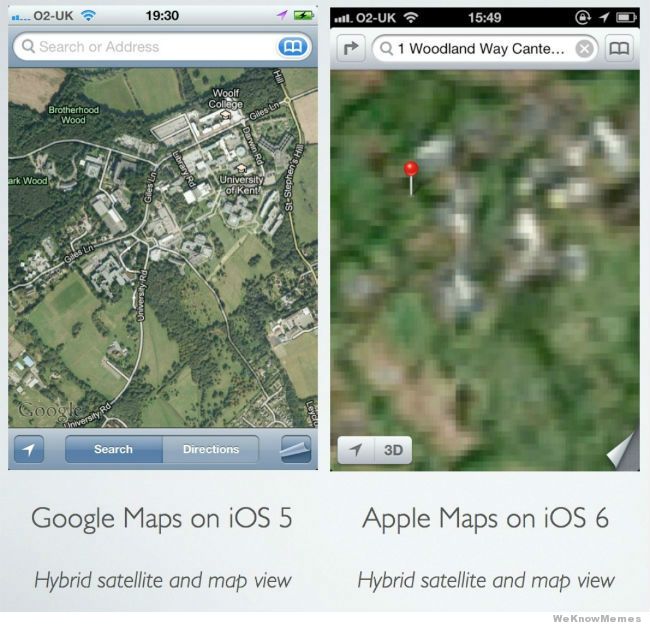 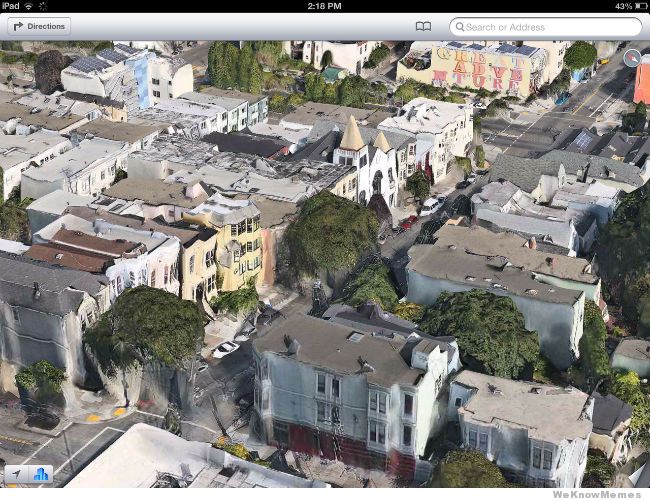 The warped city in iOS 6 maps

Apple did apologized recently about the maps issue and this is what they had to say:

At Apple, we strive to make world-class products that deliver the best experience possible to our customers. With the launch of our new Maps last week, we fell short on this commitment. We are extremely sorry for the frustration this has caused our customers and we are doing everything we can to make Maps better.

We launched Maps initially with the first version of iOS. As time progressed, we wanted to provide our customers with even better Maps including features such as turn-by-turn directions, voice integration, Flyover and vector-based maps. In order to do this, we had to create a new version of Maps from the ground up.

There are already more than 100 million iOS devices using the new Apple Maps, with more and more joining us every day. In just over a week, iOS users with the new Maps have already searched for nearly half a billion locations. The more our customers use our Maps the better it will get and we greatly appreciate all of the feedback we have received from you.

While we’re improving Maps, you can try alternatives by downloading map apps from the App Store like Bing, MapQuest and Waze, or use Google or Nokia maps by going to their websites and creating an icon on your home screen to their web app.

Everything we do at Apple is aimed at making our products the best in the world. We know that you expect that from us, and we will keep working non-stop until Maps lives up to the same incredibly high standard.

So, does the app have a future?

The app indeed has a future. Why, because Apple have invested more than 267 million dollars in vector imaging equipment and software as well as specialists to create their one-of-a-kind maps from scratch! Yes, from scratch! The maps app will be using vector rather than raster images. What is the difference? About ~15$ less in your carrier traffic costs. Raster images are constantly loaded when zooming in or out that means images are piled on each other to create the zoom in/out effect but with a cost. Every image loaded is a penny lost to the carrier network and there is a point where the images get pixelated and you cannot see further. Vector images are better because the do not use the pixel system, they use primitives such as points, lines, curves, and shapes or polygons to achieve an image with no pixels, that means when the maps load they will load the entire image of the city/country where you can zoom in and out without any additional cost and the maps can even be in 3D. Here is an example: you load one map zoom out in space, zoom back to street level and you will not be charged for loading map images because there are no piles of images waiting to be loaded to crate the environment, there is only one! Yes, only one which is also in 3D! You get the 2D overview and a 3D street view in one download. You remember those Google cars driving throughout town right? Well they are not only taking pictures for map purposes, they are also collecting data for raster 3D imaging later on for Google Earth. That is all great but there is only one setback for vector images. They need a powerful CPU and require more storage space. So owners of older Apple products may have some issues with running the maps app but we cannot be sure until the full app is released.

If you want to find out more about the differences between raster and vector images, please click here.

Apple did the right thing to stop using the services of Google, because if they continue to use the services of others they will continue to fall behind in some areas of technology, the sooner they become independent the better for us all in terms of reliable products with proven quality and stability of the hardware and software. It does make sense to start their own map service while they still had a contract with Google since now they can work in peace for the remainder of the time, because if the contract had expired Apple would have been forced to sign a new one thus losing the ability to become independent for another 3 years. That means they have to finish iOS 6 maps this year or after another three. Apple, it’s your choice but don’t disappoint us! So we await the true unavailing of the new maps. So in conclusion, do not throw away your iPhone 5 or other idevices with iOS 6 because soon you will have the most beautiful 3D ever!