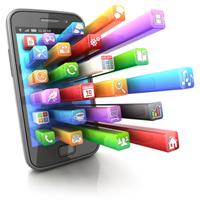 I bet there are things you do on a daily basis – going over the news in the morning, updating your Facebook status or checking-in at the cafe by Foursquare. The purpose of this article is to elaborate on the two different ways in which the above actions can be performed – through a web app or through a native app. Enjoy it!

Native development, in the context of digital industry, is the process of creating applications that are independently functioning and are tightly orientated to a specific Operating System like iOS, Android or QNX. In the recent years the phrase “native apps” became a synonym for programs that can be firstly downloaded and then installed on a computer/ a mobile device. Meanwhile, with the rapid advance of mobile technologies and the introduction of HTML5 a new type of apps were “born” – web apps. They are on the World Wide Web and are accessible through a web browser. Said with fewer words – they are sites that function like applications.

I’ll give you a quick example in order to make it simpler. Let’s take Foursquare. There is a website http://foursquare.com that is practically the web app which can be used only through a web browser like Safari, Mozilla and Chrome. Apart from it there is also a native app, available separately for iOS, Android and QNX. They are autonomous and can be installed or uninstalled at any time. No browsers, no URLs. Just touch the icon and you are there.

When talking about native and web apps, mentioning “The Big Three” is a must! “The Big Three” is just the way I call Apple, Google and Facebook. On the left we have Apple – a company that is only natively orientated, in the center is Google – kind of a hybrid – 50% native, 50% web and on the right is Facebook – a company that has successful native apps, but is still generally web orientated.

Turning point for Apple was the introduction of the iPhone in 2007 and the launching of the App Store a year after that. Currently there are around 720 000 products available there, which is quite an impressive number. iOS developers rely on the combination of qualitative hardware and elegant design. Some of the iPhone and iPod apps are really a state of the art. They provide the user both with smooth functionality and intuitive interface. All these characteristics can hardly be represented in a web environment, according to some experts. As Joe Hewitt has said:

“I want desperately to be a web developer again, but if I have to wait until 2020 for browsers to do what Cocoa can do in 2010, I won’t wait”

There is actually a grain of truth in these brave words, said from the person who created the Facebook app and website for iOS. If I have to continue this cite, I would add: “HTML5 might be powerful, but there are still things to be done and improved”.

Commenting on native development we should not left aside the amazing success of Android OS during the last 2-3 years. It is Google’s OS that is entirely concentrated around native apps. Just like Apple, it has its own virtual app store – Android Market, which has recently been renamed to GooglePlay. When referring to mobile devices, Androiders also support the stance that for the majority of app it is still better to have them on your device rather than on the Internet.

In order to be impartial I will take a look in the web camp too. Here main representatives are Facebook and Chrome OS. Maybe the most determinant fact for the web orientation of Facebook is that it was initially founded as a website. After the boom of smartphones and tablets they tried to jump into the mobile field by creating a few native apps which were good, really good.

Sadly enough, with the introduction of HTML5 everything changed. Facebook remade its site in the light of this new standard and “transformed” it into more functional and dynamic one. Most of the Flash games were rewritten and became lighter and easier-to-handle for mobile devices. The “Check-in” option for example is pure HTML5. Furthermore, the web app can provide some extras, like “following the latest activity of someone”, which are unavailable in the native applications. According to statistics http://m.facebook.com has twice more mobile visitors than the native Fb alternatives.

That is why Facebook bought Instagram. Maybe the smart guys working there will find a way to make the native apps faster-loading and better organized and to boost them again high in the statistics. Of course the web HTML5 app is not perfect and has its disadvantages. You can’t upload pictures with it, for example.

Chrome OS is another field where web apps are flourishing. It is Google’s HTML5 oriented OS which is still gaining popularity. Its interface really resembles the interface of the Chrome browser but instead of tabs there are icons for GooglePlay, Facebook, Wikipedia or other web apps. The operating system is low-power consuming because it was originally designed for netbooks. Experts like Microsoft’s CEO Steve Ballmer think that it is kind of foolish to build two systems like Android and Chrome OS. In reply Google answered its critics that for the moment they are different and totally separate from each other because the one is targeting the web and the other – the mobile native market. In future Android and Chrome OS might combine, but these are still just rumors.

But if you are not familiar with the idea of Chrome OS, another more popular place where you can see HTML5 in action is the home screen of Google. As you know every day there are different variations of the logo that honor someone famous. Sometimes the logo is an animation that looks very much like a Flash one, but it isn’t – it is HTML5.