Home » NFC Tags Vs QR Codes – Can We Compare Them?

NFC Tags Vs QR Codes – Can We Compare Them?

Near Field Communication and Quick Responsive codes – I have already written some articles for both of them explaining their principles of functioning but the question is: Who would be the winner in a dispute: NFC vs QR codes? Some users and experts might say: “Wait, wait, wait, they are totally different things and trying to compare them is like wondering whether bananas are tastier then potatoes?” Actually there is a grain of truth is such statements but only a grain. NFC is a wireless technology that is mainly used for transferring digital content, virtual and contactless payments or performing any other kind of actions that require high security levels. However recently something new came on the stage which can be perceived as a competitor of the QR – NFC tags.

It is practically a label or a picture that is meant to attract the user’s attention and a chip below it that makes all the magic happen. And magic here refers to an encoded URL, Plain text, Contact details, Foursquare Venue even a Password. So in what such a small chip which is graphically masked can be better or worse than a QR code? 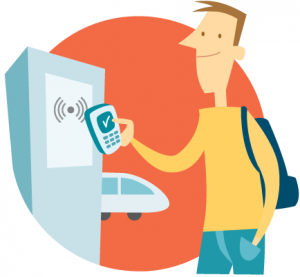 The first impression is the uppermost. Impress the user once and then he is much more eager to give you a few minutes of his precious time. Some claim that NFC tags are more user-friendly because you are not so restricted when it comes down to design customization. You can take practically everything – not only a 2D image but even an object – and integrate a chip inside. Nice isn’t it? With the QRs the basic concept is a black-and-white matrix layout. Of course creativity combined with a lot of experiments can end up in some really beautiful and eye-catching results. Take a look at my previous article: How to make my QR nicer in 5 min? If you can do this in 5 min, imagine what is possible if you devote a few hours/days in customizing your QR.
Furthermore the ways QRs and NFC tags are exploited by the user are totally different. With the one you “scan” and with the other – “tap“. In order to read a Quick Responsive code all you need is a phone/smartphone with a camera and free (most of the time) QR scanner. With NFC things are a little bit complicated because your device must have a special chip installed that practically establishes the connection with another NFC chip, when near. On the other hand all that is required from you is to turn the NFC service On. No third-part applications, no additional software. Just Tap!
Conclusion: Although NFC tags are still not so widely used as QRs, as long as the way the user is engaged and the way the connection is established, I am giving the first point to the Near Field Communication Tags.
Result: NFC-QR 1:0 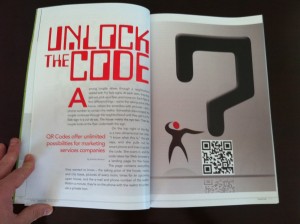 Example of a QR code in a printed media (magazine).

OK, So far so good for the nice-looking NFC tags. But let’s talk straight and put out some numbers on the table. While NFC tags are something new QRs have been on the stage for a while and daily there are millions, even billions of scans worldwide. Moreover the main sources of QR scans are printed media (49% of the users do that), Advertisements on the TV or on the Internet (28%)  and product’s packages (35%). It is practically impossible to put an NFC tag on the TV or in a website. Even if you decide to place such on a printed media we are talking about a lot of money – something like $1 per sticker. At the same time QR codes can be generated absolutely for free and can be placed – as I told you – almost everywhere.
Conclusion: If you want to engage a big target group at small cost QR codes are obviously the better choice. Combined with inviting design and good content, that is provided to the user, the only difference is the action – scan not tap. Thus the second point is for the Quick Responsive codes.
Result: NFC-QR 1:1

Which technology is more widely adopted?

In the context of the recent conferences of Microsoft and Google I/O it became obvious that the NFC technology is going to play crucial role in the future’s communications. The Microsoft Surface supports it, in Android it is available from a year with the announcement of Android 4.0 Ice Cream Sandwich and the service Android Beam. There are BlackBerry and even some Symbian models that support NFC. The iPhone 5, expected in the late summer, also is rumored to provide Near Field.

said Hugo Barra. Really substantial number put if we look in the QR camp, things are even bigger. There are companies like Blackberry that have build-in QR scanners and all you have to do is to point the camera against the code. Furthermore there numerous free applications for iOS and Android that are easy-to-use and can scan QRs instantly. It will take at least 2-3 years for the NFC tags to surpass the QRs but even then there will be devices with greater capabilities. Big disadvantage of of the 2D matrix codes is that they are very dense and too detailed and this makes them unreadable for some cameras. The more detailed the QR is, the more information it bears. So in the near future cameras might go on such level that to be able to scan codes that hold whole videos in them. Of course NFC tags might also evolve as for the moment they can hold only around 1MB of data.
Conclusion: NFC tags have made their debut but they are only about to be deeply integrated which can’t happen immediately like when working with them. Single tap is not enough and that is why the point goes again to the Quick Responsive codes.
Result: NFC-QR 1:2 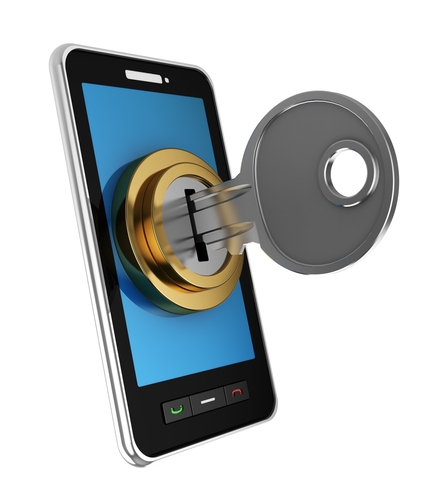 When it comes down to security we can’t turn a blind eye on the NFC. The magnetic field through which data is transferred and the small distance from which connection is established guarantee the highest possible levels of security. That is the main reason why Near Field Communication technology has been chosen for performing mobile contactless payments. Like with Google Wallet. Another brief example  from the everyday life might make the idea for the security matter clearer. If I have a QR at home which when scanned logs me in Facebook directly with my username and pass, someone can take a picture of the code without my permission and distribute it. Thus my account’s privacy will br threatened. Imagine the same situation but instead of QR it is a NFC tag which content is locked. No other way of getting to the encoded information but by tapping it.
Conclusion:  As long as security is concerned NFC is better for now. In future there might be some smart devices that can steal information while being transmitted via NFC connection but until this happens the last fourth point goes to the Near Field Communication tags.
Result: NFC-QR 2:2

So who is the winner?

The final result – 2:2 – doesn’t mean that the two technologies are equal and can be used for one and the same thing. To put it bluntly, if you need an interesting way to attract the user and to provide him with a safe and secure connection, use the Near Field Communication tags. If you need a low-cost marketing tool that will engage a lot of customers, both on printed and virtual media, then the Quick Responsive codes would do a job.