Home » Who will take the 3rd place on the mobile market?

Who will take the 3rd place on the mobile market? 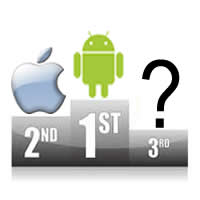 It is clear for everybody that the epic battle for the smartphone market has and still is being held between Android and Apple. If you browse the web there are plenty of funny pictures and images but if you want some solid numbers, during the last few months from Google have jumped a few percents higher to 51% market share and Apple have kept their positions – 34% market share. Before all the fan boys have started hating I am clarifying that this article concerns the phone/smartphone market, not the tablet market where Apple are absolutely dominating with their iPad and 2/3 of the market. What is more I am talking about market share my operating system. If the matter is brought to manufacturer’s share these impressive 51% have to be split between Samsung – 17%, HTC – 14%, Motorola – 11% and others while Apple don’t have to share their 34% with anyone. That is why the guys from Cupertino,Californiaare so successful and are growing more and more – because not only the software and the hardware but everything is done by them. It is an industry, a whole ecosystem. Obviously with the consequent releases of the Surface Tablet and the Nexus 7, from Microsoft and Google have understood that the winning business model is the one in which you control and manufacture everything but let’s not fall in unnecessary details and get too far from the main subject of the article.

The mobile market share and how it has evolved since 2009

In every competition, even in the context of the forthcoming Olympic Games, at the end there are 3 top places – Gold, Silver and Bronze. As you have already read in the previous paragraph (if you are still reading) the first two places are known by the general public and claiming that someone would interfere there in the near future will be a complete nonsense. However the rivalry for the third place is still about to be observed. The main candidates are two. In the blue angle, with rectangular outlook, partner of Nokia, the titan in the PC sector that is still an infant in the mobile one stands Microsoft with its Windows Mobile OS and the future Windows 8 RT. In the other angle, with black-and-silver design, mainly preferred by businessmen and businesswomen, stands RIM with its Blackberry devices and BlackBerry OS. Some would argue that it is not right to compare them as long as Microsoft are still providers only of the mobile OS, if we put aside the Surface tablet, while RIM are sticking up to the Apple’s model. Again I will put the accent on the fact that the article is commenting the mobile market from an OS point of view. I am not going to mention the rumors that are going around the web about Microsoft planning to consume Nokia. Of course nobody knows what part of this is truth. 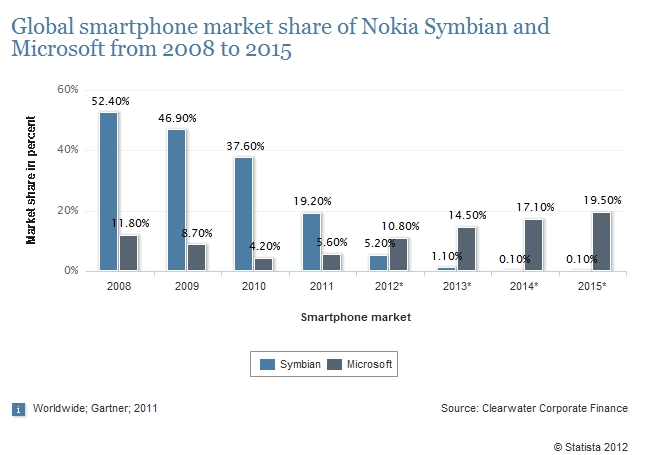 Symbian OS vs Microsoft’s OS on the mobile market

With Microsoft and RIM things are not changing so drastically like with the other two guys. There isn’t an annual growth of more than 120% like with the Android smartphones but according to the Flurry Analytics, Statista.com and Nielsen’s researches there is a tendency of Windows-powered devices to overcome the Blackberries in the next few years. If in 2009 RIM were holding nearly 41% of the smartphone market in 2012 it has dropped to around 6%. Microsoft on the other hand have gone from 2009 to 2012, from 8% only to 11%. It is a small change but is in a positive direction and gets Windows mobile OS one step before the Blackberries. There have been some problems with the Lumia model of Nokia and the fact that Windows Phone 8 Upgrade won’t be available for it. A lot of Nokia users were disappointed with that fact. This of course doesn’t mean that Windows Phone 8 won’t succeed. On the contrary experts predict that in the next 2-3 years the share of Microsoft on the phone market will increase up to 17%-19% on the account of Symbian OS which for the period from 6-7 years will have gone from 52% to 0.1%. The biggest problem of RIM is that they rarely make something new that would impress the user. As you can see on one of the images the number of shipped devices hasn’t decreased. On the contrary it is enlarging and more and more devices are being distributed every quarter but the market share is still diminishing. BlackBerry’s competitors are just better. Something like a last hope for RIM is the BB10. Some really anticipate it, despite the fact that its release was really delayed, while others are skeptical and say that this move from Research in Motion is too late and won’t do a job.

Apart from the end users, Microsoft are gaining popularity among another important medium – the developers. In Q1 of 2012 Windows Marketplace has accounted nearly 82 000 applications against the 70 000 of the Blackberry App World. Furthermore thanks to the Metro design language that is adopted in Windows 8, desktop applications will be easily and quickly optimized for usage on mobile devices. Taking into account the recent flashy representation of the Surface tablet and the prospective adoption of Windows 8 RT by other OEMs explain why Microsoft would beat RIM in their competition for the third place. 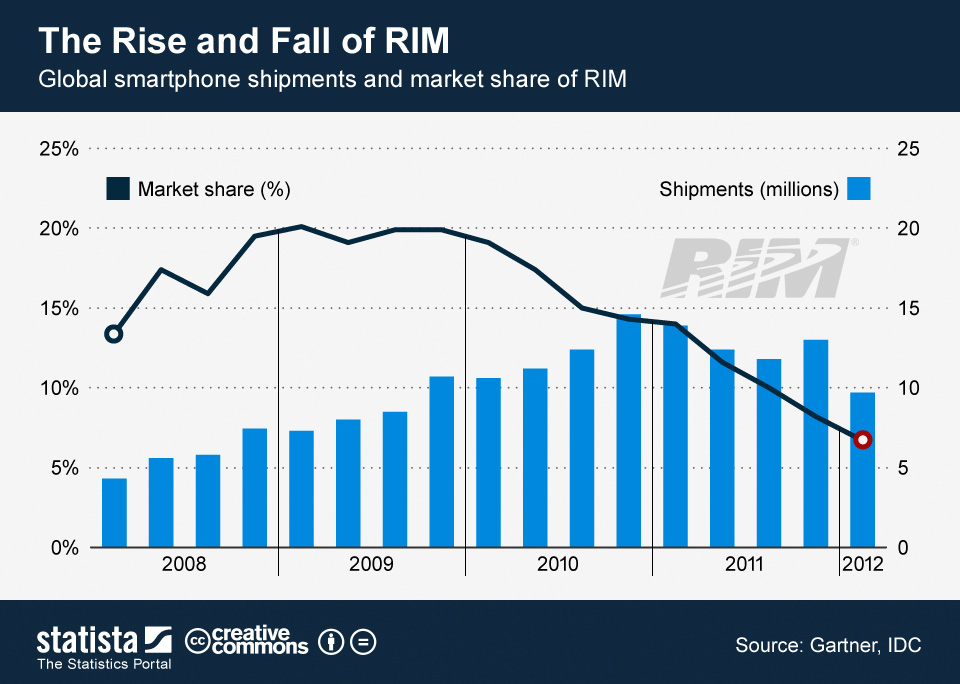 Despite that the number of the shipped devices grows, the market share decreases.

To sum up the bronze medal goes, or will in the very near future, to Microsoft. With their Windows Mobile and Windows 8 RT they have better chances to line up after Android and Apple. RIM and the Blackberries are slowly going down in the charts. The picture becomes even darker if we add the cases in the court and the substantial sum of $150 million dollars that RIM have to pay to Mformation Technologies for patent verdicts. They simply don’t have luck. It is really bad because only a few years ago BlackBerry had a solid group of supporters but, as it seems, you can’t count on your old achievements all the time. Innovation and creating a mobile OS absolutely from the scratch is what gave the boost to Microsoft. Some would argue that it is pointless to write about the competition for the third place, when nowadays even being on a second position is counted as a lost. Well it is not quite like that. The mobile market is extremely vast and there is plenty of space for everybody. It is also something that changes very dynamically and if today you are third, tomorrow might be second, or even more. Of course dreaming is still something that you can do for free!