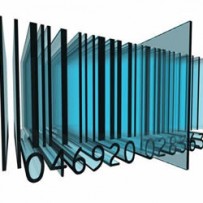 As I said in one of my previous articles, barcodes are all around us. It is beyond shadow of doubt that these encoding labels ease our existence greatly. Actually I made a little mistake – they are not only labels – there can also be forms and shapes, engraved or applied to certain surface. To put it bluntly – barcodes are not only 1D and 2D – they can be 3D as well.

To begin with the world-wide known zebra–stripped barcodes. These linear markers, some of them numerical, some – alpha-numerical, are the oldest ones. Firstly used for designating a pack of chewing gums, they now are exploited everywhere. GS1 has accepted two main standards – UPC and EAN13 – to be used in the purchasing and retail industry. What is special about 1D codes is that they represent data horizontally, under the form of black bars and white spaces. ID numbers or short tags are perfectly encrypted in them, but that is all. Strings, that have more than 25-30 characters, result in unbearably long symbols that are inefficient. Texts and URLs cannot be encoded. Despite their low data capacity, one-dimensional barcodes are simple-to-create and respectively easy-to-read and that is why they are the most widely used. From them, them more famous are UPC, EAN, Code39, Code128, ITF14, Code93.

We continue with 2D codes. They include DataMatrix, Maxicode, PDF417 and probably the most popular among the general public for the last 2-3 years – QR code. Data capability is the first major difference. As long as information is encoded both horizontally and vertically, under the form of rectangles, thousands of characters can be carried. URLs and contact details can now be easily represented in a 2×2 cm black and white square grid. All the two dimensional barcodes offer error-correction levels which is quite handy – your code can undergo some substantial damages and still provide the information it bears. Places where 2D find their application are numerous. PDF417, for example, is widely used in the industry and air-transportation as a static database (it can contain up to 1800 letters). Most commonly the Portable Data Format provides specific parameters about tiny electronic parts or if it is on your boarding pass – details about your flight.

Other unique feature for some of the square barcodes, particularly for the QR, is that it can be scanned with a modest mobile phone, equipped with a camera and simple decoding software. This advantageous characteristic makes the Quick Responsive topology a perfect way to engage practically everybody as a target group. As a result QR has become one of the most powerful contemporary marketing tools.

So far I have briefly explained you about 1D and 2D barcodes. But if we have to proceed to the next level of the barcode evolution, what would it be? That is right – a three dimensional barcode symbology. Its looks like an ordinary code with the only difference, that the bars/squares are protrusive and can be felt when touched. Their height is calculated by the scanner as a function of the time it takes the laser to travel to the code and back. Understandably special readers are required for such operations and that is why 3D designators are mainly used in the industry. They are not labeled on the product, they are usually engraved directly on its surface or on some kind of alloy and then attached to is. Using strong materials for the foundation of the barcode is what makes it extremely resistant to bad conditions like high pressure or heat. In manufacturing processes this could be crucial.

Furthermore, there is no need of error correction levels because it is really hard to alter the encoded data. Because of the unadulterated authenticity, 3D codes are used as a security precaution in the jewelry business and in the pharmacy. They are integrated in diamonds as microscopic cubes, that cann’t be seen with bare eyes. These cubes, that are exceptionally firm and inflexible, can prove who the owner is in case of theft.

In the middle of 2006 a Japanese company called “Content Idea of Asia” introduced the so called PM code. It is basically a colorful QR code. It is defined as a 3D but is not protrusive – the third dimension is the color. As I said in the previous paragraph, 2D barcodes have larger data capacity than 1D because of the two encoding directions – vertical and horizontal. Respectfully 3D surpasses 2D. If with a simple QR you can encode the URL to a picture in the internet, with the PM topology you can encode the picture itself. Talking in numbers, the capabilities of a Paper Memory symbol ranges from 0.6Mb to the impressive 1.8Mb. Not only pictures, but short advertising videos are encodable as well. With the advent of the mobile compatible PM, barcodes set the beginning of a while new marketing era in the advertising industry. The best of innovation is the internet independency. Small videos, song fragments, pictures – all these can be deciphered on paper. This can be really useful in the commercial enterprise, art exhibitions or as a source of how-to manuals on the back of electrical appliances.

I bet that at least half of you, who have read the whole article, in the beginning thought that barcodes are only used in the retail fields, and now are like “WTF?!? Cubes in diamonds and videos can be compressed in 5×5 cm paper squares?!?” These one, two and three-dimensional encrypting symbologies are truly amazing creations. They are constantly improving and changing our lives. Who knows – after 5 or 10 years films might not be downloaded from servers – they might be accessible with a single code scanning. Here are all barcode generators made by Mobilio. Download them now from the Mac AppStore.