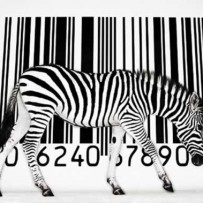 All of you know what a barcode is and how it is used. I am not going to overburden your mind with technical terms and specifications. My only purpose is to simply explain you what the barcodes are used for and why they are so beneficial. The basic function of the barcodes is to make everything automatic. It provides data that can be quickly and adequately scanned by machines. The first barcodes were, and still are one dimensional, composed of straight black bars and spaces, used to encode product IDs and designating numbers. They are perfectly usable not only in the shipping or tracking procedures but at the checkout in the supermarket as well. Imagine the following situation: you are approaching the cashier desk with a trolley full of products.The cashier can serve you in 5 minutes, by sliding every

item over the laser scanner and adding it to your bill. Everything goes fast, smooth and effortless. What would happen if there weren’t barcodes on the stocks and the cashier had to enter every single ID manually in order to sell it? If you have 60 items in the cart and every item takes about 25 seconds to be processed, this means that you would have to wait 20 minutes in order to have your purchases, instead of 2. Inconvenient, don’t you think?

At the moment there are numerous types of barcodes over the world but did you know that there are only two standards of barcodes that can be used at the retail point of sell – UPC (Universal Product Code) and EAN (International Article Number). Basically they function one and the same way but UPC is used mainly in the USA and EAN – in Europe. Basically the UPC is kind of predecessor of the EAN which was introduced in 1974 and was mainly adopted in North America, UK, Australia and New Zealand. It was an unprecedented breakthrough – everything became much easier and less time-consuming. Just scan and the computer will do the rest. So far so good but it turned out that the UPC was only the first step. In the 80s, the EAN standard was introduced. EAN practically is the global version of the UPC.
Despite this attempt for universalization, nowadays these two standards still exist and are used. They represent one and the same information but with different numbers and methods of encryption. It is like shoe sizes – the US size may be 11 and the EU size – 45 but the dimensions of the shoe is one and the same. Different is only the way of representation. The continental distinction between the UPC and

the EAN leads to many hardships for multinational producers. If a manufacturer of mobile devices wants his production to be sold both in the USA and in Europe he has to put two barcodes on the package – one UPC and one EAN. This may be a problem if the space is limited. I doubt that anyone would wish there to be more barcodes than flashy labels and logos on his product cases. Currently a new global standard is about to be released. It will be accepted everywhere – in the USA, in Europe, in Japan and it is called GS1 Standard. (GS1 is a name which is explained further in the article). The mentioned innovation will be the next step in the generalization of the world trade principles. Of course it will take some time until the new standard sinks in and replaces its ancestors. Download now our UPC barcode generator or EAN barcode generator

When talking about barcodes, especially for UPC & EAN, it is inevitable not to mention GS1. It is a global non-profit organization with mainly regulatory function. Its reputation is acknowledged all over the world and if you want your barcodes to be legal they should be registered in the GS1’s system. Understandable question is “What is there to be regulated and can things go without this association?” The answer is No and I will plainly explain why.
Let’s say that there is a international store selling all kinds of goods. You go there and want to buy a bike for $200. When the bike’s barcode is scanned at the POS (point of sell) the computer says that the product is not a bike for $200 but LCD TV for $4000. Wait a minute, what has just happened? It turns out that the bike is imported from one country and the TV from another. Unconsciously the two manufacturers had designated the bike and the TV with one and the same barcode. The main purpose of GS1 is to prevent such mistakes by making every single UPC or EAN unique. Each barcode has first to be registered in the GS1 system and only after that used on the trade market. Furthermore only these two standards were chosen to be part of the GTIN (Global Trade Item Number). They are used as identifiers for trade items produced by GS1. These identifiers are combined in a set of numeric prefixes. In essence these digit identifiers, encoded in a simple barcode can say where the product comes from, who the manufacturer is, which the brand is and give some item reference. Check out all our barcode generators and download them.